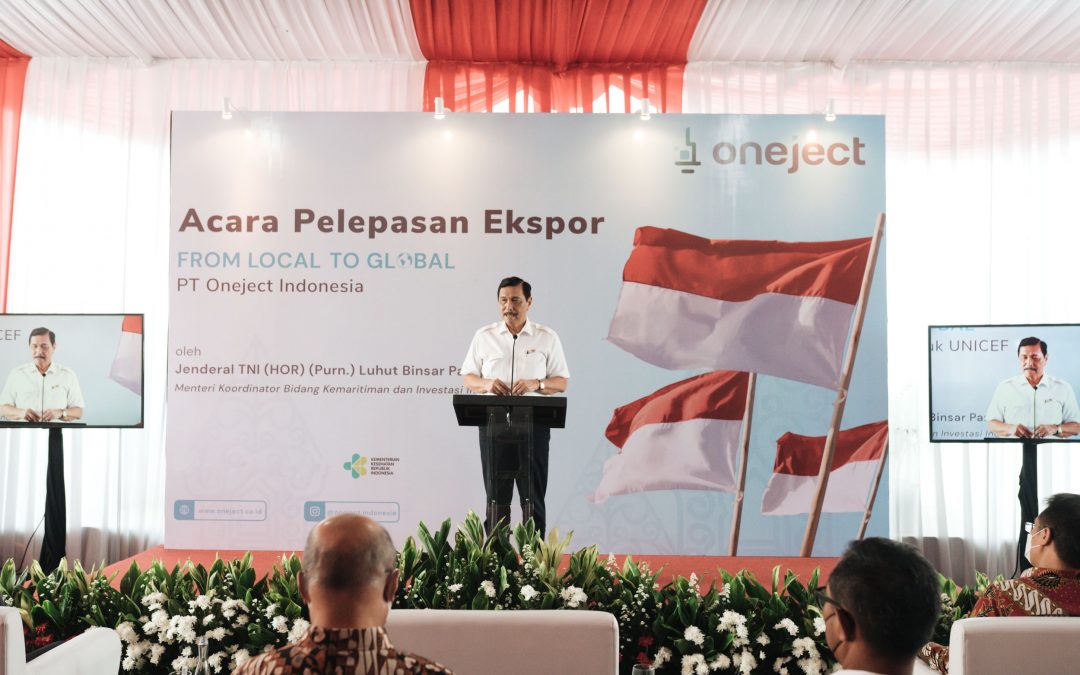 PT Oneject Indonesia (Oneject), as a sister company of PT Itama Ranoraya Tbk. (IRRA) – the largest manufacturer of Auto Disable Syringe (ADS) and safety needles in Asia – exports disposable syringes or ADS to meet the needs of NGOs and also to Ukraine, with a total volume of 200 containers or 150 million pieces of ADS syringes .

On this occasion Luhut appreciated Oneject and said that this export was a good step, in the midst of the government’s efforts to campaign for Increasing the Use of Domestic Production (P3DN) and encouraging exports of finished production.

“P3DN is important to be carried out and must be supported by all parties in order to increase job opportunities in this sector and be able to save foreign exchange and even increase exports which have an impact on the national economy like what Oneject Indonesia did,” Luhut said in a press release, Thursday.

On the same occasion, Minister of Health, Budi Gunadi Sadikin, appreciated PT Oneject Indonesia for successfully exporting ADS to NGOs. On the other hand, the government is committed to supporting export-oriented domestic companies.

“I am proud that Oneject can sell its products to NGOs, this proves that this company must have good corporate governance and competitive prices,” said Budi.

Meanwhile, the President Director of PT Oneject Indonesia, Jahja Tear Tjahjana, explained that the export this time was to meet the NGO’s demand for 120 million pieces . Meanwhile, to fulfill the request of the Ministry of Health of Ukraine, the company exported 30 million ADS, bringing the total exports to 150 million ADS or 200 containers with a total sales value of US$ 10.5 million.

“Since 2008, the company has been exporting to various countries such as Italy, Germany, Nepal, Cuba, Pakistan, Algeria, Kenya, Tanzania, Sri Lanka and also to other international institutions. With a target production capacity of ADS and safety needles to reach 1.2 billion per year, 50 percent to fill domestic needs, and the rest to be exported,” said Jahja.

He added that as a manufacturer of smart syringes , which is a combination of Safety Needle and Auto Disable Syringe (ADS), its TKDN (Content Level for Domestic Products) has reached 60%. “As for the types of syringe products we produce, they are ADS, Smart Syringe, Safety Needle, Disposable Syringe , and Disposable Needle ,” he said.

Oneject’s injectable products have received certification from the World Health Organization (WHO). Since 2020, WHO has started promoting the safe use of injecting equipment around the world. In Indonesia, the use of ADS syringes and safety needles in medical circles is only below 20%, the rest is still in the form of non-ADS syringes.

Jahja emphasized that this NGO purchase is an important momentum for Oneject, where Indonesian injection needle products are trusted to be part of the global state and NGO vaccination program. Until 2022, the company has committed to fulfill cooperation contracts with NGOs for the procurement of 850 million ADS syringes and safety needles, of which 300 million will be shipped this year.

According to Jahja, vaccination is an effort to reduce transmission, reduce mortality and achieve herd immunity, which is carried out by all countries, so that the need or demand for injection equipment has increased to an extreme.

Prior to the Covid-19 pandemic, WHO data said approximately 16 billion injections were given annually, of which 5%-10% were used for vaccinations and immunizations. Meanwhile, with this pandemic, the world needs between 8-10 billion syringes, only for the Covid-19 vaccine.

“Global syringe manufacturers are currently facing the challenge of being able to meet the increasing demand that is faster than the increase in production. This has prompted Oneject to complete the construction of its new factory with an installed capacity of 900 million, bringing its total capacity to 1.2 billion ADS syringes and safety needles per year,” said Jahja.

With this capacity, Oneject ensures that the need for syringes for Covid-19 vaccination in Indonesia and for other needs can be met. In fact, the export portion will increase to 50% of production, so that the export contribution of medical devices will increase.

The increasing portion of export sales, accompanied by the wide spread of the demographic base of buyers, has become the basis for Oneject’s consideration to increase production capacity again next year. Regarding funding sources, management will prioritize equity options, in order to maintain an optimal capital structure. 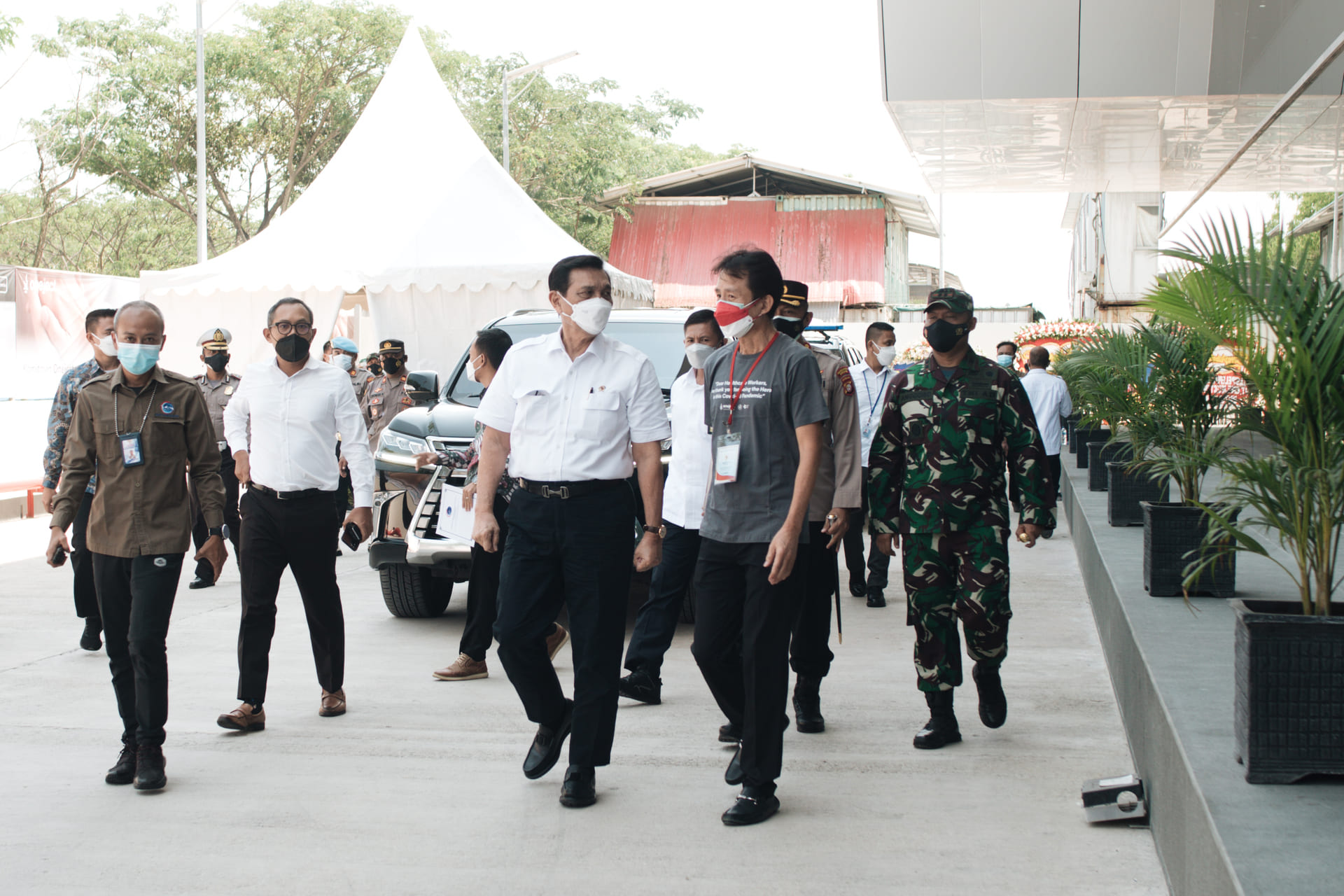 “Next year we plan to gradually increase the capacity to 2 billion syringes per year. The new factory building currently accommodates the planned increase in production capacity, including for the production of other medical devices, so we only need to add the number of machine lines ,” explained Jahja.

PT Oneject Indonesia in collaboration with the Indonesian Red Cross (PMI), is also preparing for the production of blood bags, to meet the needs of blood bags at PMI’s Blood Transfusion Unit (UTD), which so far are still imported.

It is hoped that with the local production of blood bags, PMI and their hospitals/Blood Transfusion Units, can use locally produced blood bags or not depend on imported products anymore, in accordance with government plans and policies, increasing domestic production as much as possible. especially in medical device products (Alkes).

In addition, the new Cikarang factory with a building area of ​​15,000 m2, apart from being used as a syringe production center, also has a concept as an Original Equipment Manufacturer (OEM) production area, which is prepared for Abbott Bioquick’s local production, the Covid-19 Swab Antigent Test tool. owned by the global medical device manufacturer Abbott Laboratories, in collaboration with PT Itama Ranoraya Tbk.

“Oneject factories, both in Cikarang and Sentul, will become a center for the production of medical devices with an orientation to fulfill TKDN (Domestic Component Level), not only in meeting the needs of the domestic health sector, but also to fill the global market. We hope that this contribution can support the national health device independence program that is being carried out by the government,” said Jahja.